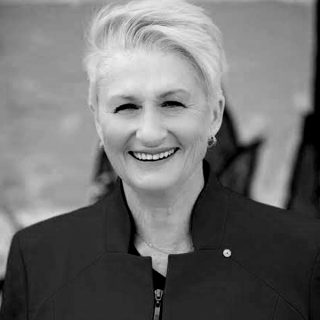 In October 2018, in a Federal By Election, Dr Phelps was the first woman and Independent to be elected to the seat of Wentworth in the House of Representatives. Dr Kerryn Phelps was elected to the Council of the City of Sydney in 2016 and was Deputy Lord Mayor from 2016 to 2017.

Kerryn is a mother of three, doctor, businesswoman, health communicator, public health and civil rights advocate, author and media commentator. She is Jewish by choice having converted in 1998. She has lived in the Wentworth electorate for 17 years and practised medicine in Double Bay for 20 years.

For 30 years she has used her communication skills to elevate health literacy as a pioneer in health media across multiple media platforms.

As the first female President of the Australian Medical Association, Kerryn was able to influence health policy at State and Federal level. Whilst AMA President, Kerryn forged a solution to the looming medical indemnity crisis, enabled changes to medical workforce policy, encouraged the development of the first AMA indigenous health report card and initiated the organisation’s first health policies on complementary medicine, and on sexuality and gender diversity.

Dr Phelps started working as a medical reporter on morning television soon after graduation, recognising early in her career that improved community health could be achieved by increasing health literacy, improving the ability of people to act on trusted sources of information in order to live healthier lives.

She has been the health columnist for the Australian Women’s Weekly for over 25 years and has authored six health books including a textbook of general practice. These publications build on mainstream medicine while challenging the health professions and patients to think more expansively about solutions to health problems, a concept known as integrative medicine, literally “integrating” multiple healthcare philosophies.

Dr Phelps has been at the forefront of the struggle for LGBTQI inclusion and equality for two decades. In Australia. She has met with Prime Ministers, government Ministers, politicians and religious and business leaders, police and armed forces to advance the cause of equality, diversity and inclusion.

Dr Phelps is an Ambassador for Barnardo’s child protection work, a Patron of ACON’s Pride in Health+Wellbeing program. She is also Patron of the Gender Centre 2019.

Dr Phelps was awarded an Order of Australia for her contributions to Medicine as well as the Centenary Medal.